Home » Joint accounts – who owns them?

Joint accounts – who owns them? 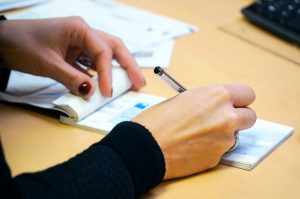 Joint accounts are convenient but are they wise?

Joint accounts can make life easier. If you have shared bills to pay or relatives who need help to manage their money using joint accounts might be convenient. But what seems like a solution could actually create problems.

If money is held in an account that can be accessed by more than one person who owns the money?

Take these examples of joint accounts:

In those scenarios, it seems pretty clear who owns the money in the joint accounts, doesn’t it? The reality is that it can be anything but clear. It all depends on each person’s intentions about the money in the bank account they share. The big question is what does each account holder want or expect to happen to the money if they die?

The rule that applies when a joint account holder dies is that the surviving co-owner is entitled to all the funds in the account. This rule allows the surviving account holder to transfer the account into their sole name just by producing a death certificate for the deceased co-owner. But if we think about the examples described above it’s easy to see how the survivorship rule could result in problems.
Where two or more people have their names on a bank account there is a general assumption the account funds belong to all of them equally. The problem is the general assumption isn’t always correct. Disputes often happen about the ownership of funds in joint accounts especially when a relationship breaks down, or one of the account holders dies.

In the case of Drakeford v Cotton and Stain 2012, the court looked at the situation of adding someone’s name to a bank account. In that case, there was a dispute over whether the funds in a joint bank account passed automatically to the surviving co-account holder following the death of the other co-account holder.

In the Drakeford case Mrs. Cotton inherited money from her husband when he died in February 2008. Shortly after the death of her husband, Mrs. Cotton added the name of one of her daughters, Mrs. Stain, to two building society accounts containing about £52,000 in total. Until Mrs. Cotton’s death in August 2008, the only withdrawals from the accounts and all the deposits were related to Mrs. Cotton. At no time did Mrs. Stain pay any of her own money into the accounts and she didn’t make any withdrawals from it.

The question to be answered following Mrs. Cotton’s death was whether funds in the account formed part of Mrs. Cotton’s estate. If the money was part of the estate then it would be shared equally between her three children. If the general rule of survivorship applied then Mrs. Stain would take all the money in the joint accounts.

Mrs. Stain argued that statements made by Mrs. Cotton less than two months before she died showed an intention by her to make an immediate lifetime gift to Mrs. Stain of the money in the accounts. If the court agreed with that argument it would mean the money was in effect being held from that point by Mrs. Cotton and Mrs. Stain as trustees for the benefit of Mrs. Stain only.

The court considered the following points:

It was agreed by the parties that in the period from 7th February 2008 to the middle of June 2008, Mrs. Cotton owned the money in the accounts. It was also agreed that when Mrs. Stain’s name was added to the account in February 2008 that was done for convenience.

The court referred to a much earlier case, Marshal v Crutwell 1857. That case established that if a second account holder is added to a bank account for convenience sake and the funds are used for only for the benefit of the original account holder that may be enough to rebut an assumption that the funds belong to both account holders.

The Court’s decision in Drakeford v Cotton and Stain was that from June 2008 onwards Mrs. Stain was entitled to the money in the accounts. That was because there had been a change in Mrs. Cotton’s intentions regarding the funds. From mid-June 2008 she intended that the funds were a genuinely joint asset all of which were to pass to Mrs. Stain when Mrs. Cotton died. Therefore the bank account funds didn’t form part of Mrs. Cotton’s estate.

It’s likely that if there hadn’t been significant evidence in the form of statements made by Mrs. Cotton before she died that she wanted the money in the accounts to pass to Mrs. Stain, the court may have been more inclined to find that the monies were part of Mrs. Cotton’s estate. That would have meant the money had to be divided amongst all three of her children equally.

In the Drakeford v Cotton and Stain case evidence of Mrs. Cotton’s intentions played a major part in helping the court to reach its decision. Here are some tips on using joint accounts:

Thinking of putting your home into the names of your children? Read this before you do

Get more free tips and make sure you never miss our updates – subscribe to our newsletter.