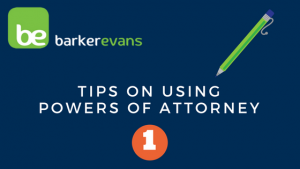 One of the commonest reasons people give for not wanting to make a Lasting Power of Attorney is fear of attorneys misusing powers of attorney.

A former Court of Protection judge, Denzil Lush, created a shock when he said he would never sign a Lasting Power of Attorney because he thinks they

“can have a ‘devastating effect’ on family relationships”*.

Denzil Lush alleged there is not enough transparency or scrutiny of powers of attorney.

Attorneys may get carried away with the power they’re given and forget that it has its limits. They start to believe they can take all kinds of actions that are way beyond what the Donor intended and what the law allows. A common example of this is where an attorney appointed by a Lasting Power of Attorney for Property and Financial Affairs makes decisions about the Donor’s health and welfare.

Ted is in his eighties. He lives alone and gets by with some help from his neighbour Jackie who does shopping for him and cooks a hot meal for him most days. She takes him to hospital appointments in her car and collects his prescriptions from the pharmacist. A few years ago Ted made a Lasting Power of Attorney appointing his nephew as his sole attorney.  The Lasting Power of Attorney gives his nephew general authority over all of Ted’s property and finances.

Jackie tells Ted it is costing her quite a lot to run around in her car doing errands for him. Ted asks his nephew to arrange to pay Jackie money every month to cover her petrol and other expenses. Ted’s nephew is suspicious of Jackie and decides to make some changes to reduce her involvement with Ted.

Ted’s nephew contacts Ted’s GP’s surgery and arranges for Ted’s prescriptions to be sent to a different pharmacy which is too far for Jackie to travel to. He then writes to Jackie telling her that a taxi will be taking Ted to his hospital appointments from now on and that he has arranged for a company to deliver a hot meal to Ted every day, so there is no need for her to buy food to cook for Ted.

Spotting the misuse of power – Ted’s nephew doesn’t have authority to make changes that directly relate to Ted’s health and welfare. He is also not acting in Ted’s best interests, something he is required to do by the Mental Capacity Act 2005. He’s not showing any consideration for Ted, who enjoys his social contact with Jackie and likes her cooking.

Ted’s nephew might not realise he is doing anything wrong. He might argue that he has an obligation to protect Ted from potential financial abuse by Jackie. However, without a Lasting Power of Attorney for Health and Welfare Ted’s nephew doesn’t have the legal authority to change Ted’s prescription arrangements or decide to alter his food and cooking arrangements.

Ted’s nephew is also misusing his powers under the Lasting Power of Attorney for Property and Financial Affairs. His decisions to use Ted’s money to pay for taxis and a meal delivery company’s services have been made without Ted’s knowledge and consent, which is a breach of the 5 principles of the Mental Capacity Act 2005 set out in section 1 of the Act.

(1)  A person must be assumed to have capacity unless it is established that he lacks capacity.

(2)  A person is not to be treated as unable to make a decision unless all practicable steps to help him to do so have been taken without success.

(3)  A person is not to be treated as unable to make a decision merely because he makes an unwise decision.

(4) An act done, or decision made, under this Act for or on behalf of a person who lacks capacity must be done, or made, in his best interests.

(5)  Before the act is done, or the decision is made, regard must be had to whether the purpose for which it is needed can be as effectively achieved in a way that is less restrictive of the person’s rights and freedom of action.

What should Ted and his nephew do?

Ted and his nephew should try to come to an understanding about Ted’s wishes. If Ted’s nephew is suspicious about Jackie’s involvement, he should try to explain his concerns to Ted. Ted should make clear to his nephew that he doesn’t have Ted’s authority to make decisions about health and welfare issues.

Ted has the right to make his own decisions even if those decisions are unwise (Principle number 3). Therefore Ted’s nephew doesn’t have the right to stop Ted paying Jackie a monthly amount for expenses. If Ted’s nephew remains concerned about Jackie’s motives he could instead monitor the situation to see if  there is evidence in the future of financial abuse by Jackie.

Find out more about our training and support for attorneys here